I’m glad I can finally begin to write this. It has been 6 months since the last (public) release of Ivercy. That is a long time. Much too long.

While we never really stopped to work on Ivercy, for a multitude of reasons, we never made it all the way to a public release. - Until now.

During the last couple of weeks, we got several inquiries, if Ivercy is still actively developed. Yes, it is! And here’s the proof. – However, if you were waiting for some of the functional enhancements we have got planned, you might still be a bit disappointed.

The overbearing topic of this release is infrastructure.

Soon after the last public release of Ivercy, back in April, we were getting more and more requests for things like supporting Access 64 bit, the .net Framework 4.0 and improvement of the installation options and experience in a restrictive corporate environment.

While the necessary changes to Ivercy itself were not that difficult to implement, and in fact are available via non-public releases to some of our customers for some time, the overall experience was ruined by the shortcomings of our installer. To overcome these limitations was one of the key issues holding this release back for so long.

Ivercy is built against the .net Framework 2.0, which was the basis of everything .net out there for quite a while. With Windows 10 (and 8) by default only the newer .net Framework 4.0 is installed. On these operating systems, you had to explicitly add the 2.0 Framework to use Ivercy.

This new release is still built against the .net Fx 2.0, but it works with the .net Fx 4.0 as well. During installation, our setup will detect whether you have got 2.0 or 4.0 installed and will configure Ivercy accordingly. 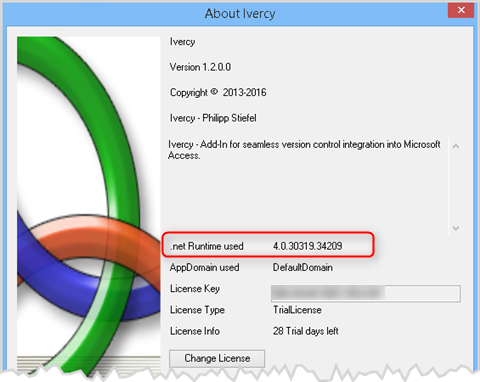 Ivercy itself work flawlessly with .net 4.0, but during our testing we discovered that some 3rd party components do not. For example, the MSSCCI-Provider for older versions of Sourcegear Vault will crash instantly if invoked from .net 4.0. For that reason, we play it safe. If both versions of the .net Fx are present, version 2.0 will take precedence.

I was surprised that we got quite a few requests to support Access x64. So we enhanced Ivercy to accommodate this requirement. Thanks to the .net Framework we were able to make Ivercy dual platform instead of building two separate versions of Ivercy. There is just one binary assembly running on both platforms. Only one small satellite component is actually platform dependent, so we deploy two versions of that and load the correct one at runtime. 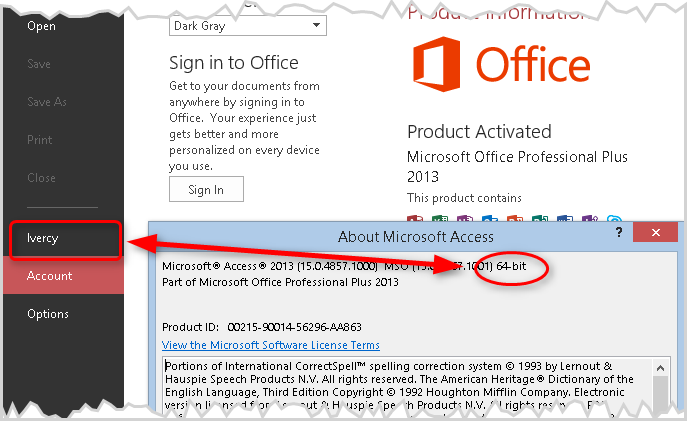 Once again the installer makes things more difficult than necessary. An MSI-Package can either be compiled for 32bit or for 64bit, but not both. Considering that more than 95% of our users only need 32bit support, we do not provide a dedicated 64bit installer (yet).

If you want to use Ivercy in Access 64 bit, just install the 32bit version. After installation please run the batch script Ivercy_install_registry_x64.cmd in the folder Ivercy was installed in. This will enable Ivercy in the 64bit version of Access.

Of the primarily supported SCC-Systems only Microsoft has got a 64bit-MSSCCI-Provider for TFS.

We originally used a Visual Studio Installer project to create the MSI-Setup for Ivercy. That was a very simple solution that worked. – Sort of.

While it was easy to implement, it had lots of drawbacks. To name just two:

These two combined were a major a nuisance, as each user that should have Ivercy available, would need administrator permissions during setup (at least temporary).

To get rid of these nuisances, we built an all new installer package for Ivercy. It will run with user permissions only, but still can be optionally run with admin permissions to install for all users on a shared computer or terminal server environment.

There will be more detailed documentation dedicated to sysadmins available soon. If you just want to install Ivercy for yourself on your computer, choose the “per user” installation and you are good to go.

The new version does include several bug fixes. While I would consider most of the bugs fairly minor, there was one actually that was nasty.

I hate to lose work already done! So I am profoundly sorry that some of you experienced exactly this due to a misbehavior of Ivercy. – My apologies!

There were two situations where this could happen.

If you checked out an Access Object, which was already modified locally before checkout, and you activated the “Get Latest Version”-option in the checkout dialog, then Ivercy did not warn you about losing your local changes.

If you explicitly invoked the “Get Latest Version” command, it was possible to select Access Objects that were already checked out (and potentially modified) for the Get-Latest-Operation. If you continued any local changes were overwritten.

Both incarnations of this bug are fixed in the new version.

First and foremost, Ivercy now displays a highlighted warning message, if you are about to overwrite local changes with the repository version of an object.

Second, you can configure Ivercy to always exclude objects that are already checked out from the Get-Latest-Command. Use the ExcludeCheckedoutFromGetLatest-Option to control this behavior. Please be aware that this is enabled by default!

There are some other improvements, such as further reduced startup time, clarified configuration dialog showing the current configuration, the template configuration and global options (new) in a single tabbed form. As well as several other bug fixes.

So go to our download page and “check out” the new version and let me know what you think. – We appreciate any feedback!

Larry, thanks for asking. This is the most anticipated feature.
There is no progess yet, but than could change quickly now.