In the recent newsletter for version 1.2 I wrote: “we are planning to go back to more frequent, smaller releases”. When I wrote that, I had no idea how soon the next release would emerge.

We deliberately dropped some minor features from the last release due to time constraints. I didn’t want to defer that long overdue release any further. Still, I wanted to roll out those additions as soon as possible.

Additionally, there was a bug reported for v1.2 that was pretty annoying – though not critical.

These facts added up, made a compelling reason to release another version of Ivercy so soon.

The main improvement in this new version is several small enhancements to the Object List dialog.

I was working on-site at a customer this week. Due to administrative constraints, he had the newest version not installed yet. Working with the previous version of Ivercy, I dearly missed the new status filter options in that dialog. – So, these changes might be only small, but they are incredibly helpful.

We removed some of the status filter items from the drop down that were not particularly useful und probably confused some of you more than they helped anyone.

Finally, we added the new, virtual status “New in repository” which is very helpful if you want to get new objects from the repository, which were added by someone else working on the project.

If you actually want to continue to use the more fine-grained old status filter options, you can set the UseSimplifiedSccStatusFilter-option to Yes. 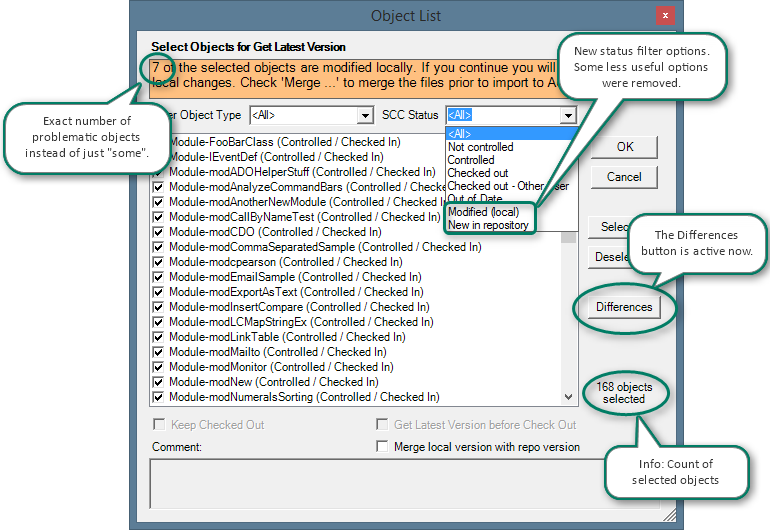 The Object List dialog shows the count of selected objects and the exact count of problematic objects with possible conflicts between the local and the repository version.

The Differences button in the Object List is now active and working. It enables you to invoke your Diff-Tool right from that dialog for the currently selected object. This is very handy if you want to take a quick look at the differences between two versions before deciding how to retrieve the latest version.

This new version finally supports integration into the Japanese localized version of Microsoft Access. This was requested by several of you. Unfortunately, general support for a Japanese language environment is still not really there due to limitations in the MSSCCI-API-Definitions.

When creating an AccDE/MDE from a controlled database with Ivercy 1.2 you would get an error message saying “The expression you entered refers to an object that is closed or doesn’t exist.”. – This error does not do any harm; everything still works as intended. But it is very annoying if you frequently create an AccDE/MDE from your project.

This error is fixed in the current release.

When Ivercy was exporting or importing the objects from Access some of you experienced error messages like “The search key was not found in any record” or “No current record”.

These error messages are caused by Access itself failing to import or export the object. The cause is most certainly some sort of corruption that object. We are still investigating these issues and will publish an FAQ article on this topic as soon as we know how to solve these issues.

In this new version of Ivercy, the error messages regarding such issues will display the Access object name that caused this error. – This should at least help to get to bottom of the issues.

Let’s wrap this up here. These are all rather small changes, but they are so useful that I absolutely recommend to download and upgrade to this new version!