I’m excited about the latest new feature in Ivercy. I call it Ivercy Local Change Tracking (LCT) and it’s really cool. Let me tell you a bit about it.

The problem with change tracking of version controlled Access files

If you ever worked with the Microsoft Source Code Control Add-In in Access, you most certainly know the problem. Someone else in you team has changed a file (an object in Access) and you know nothing about it. Maybe the SCC-Add-In displayed the Checked-Out-Status for some time while you colleague was working on it, but it changed to Checked-In after a while and you do not know if your team member actually changed something or just undid his changes. If you actually noticed it and are interested, you could do a Diff of your local version against the repository and will see any changes, but that is a hassle. It is like flying blind.

It might get even worse. You absolutely know someone else has changed a file because they told you, or you even did it yourself on another computer. You select the form, report or query in Access in and hit the Get Latest Version button of the MS-SCC-Add-In. – And…

…it doesn’t get it. It just does nothing. You know the changes are there, but you just can’t get then. – Frustrating. The only thing that helps here, is deleting you local copy of the objects (forms, reports, etc.) , including it’s temporary file in the working directory and then get the latest version from the repository.

One of the underlying problems is, that you are not working directly with the source files, but with their representation in Access. Access changes the contents of the files while you are just importing them. So you are working on an incarnation of the file that might be different from it’s current source file, but these changes are irrelevant. If you actually modify the file yourself, the changes suddenly matter, but from the technical point of view, the MS-SCC-Add-In can not tell the difference.

The change tracking features of your SCC-Provider simply can not track changes to the objects in Access. They don’t see those objects there because they know only about the files.

So here comes Ivercy Local Change Tracking. Ivercy is a version control add-in that runs within Access. It’s Local Change Tracking feature calculates and tracks it’s own checksums not only of the files, as the the SCC-Client will do, but also of the objects within Access. This allows Ivercy to know which objects are still matching the source files in your local working folder and it is able to highlight those objects that don’t any more. It does not matter if you checked out an object or not, Ivercy shows you, if you modified the object. That is what matters much more than the former. 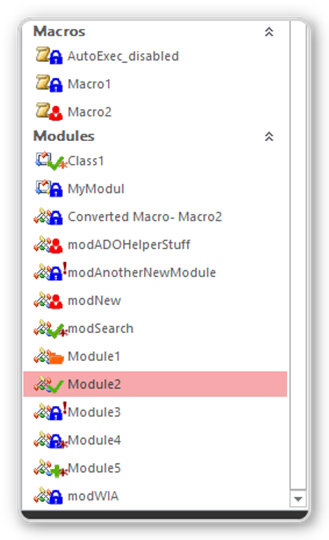 See this screenshot of the Access Navigation Pane. In addition to the usual icons for Checked-In, Checked-Out, etc. it has small informative icons that show you additional status information. The small asterisks indicate that you modified an object. Your local object is different from the version you pulled from the repository. And it does not matter if these changes are only in Access or already synced to the files in your local working folder.  Ivercy recognizes both types of changes and marks them for you. – This is great, isn’t it?

But wait, it get’s even better. The most annoying problem described above weren’t your own changes, but the changes of someone else. These changes have to be tracked by you SCC-Client as they are only available in the repository yet. But the good thing is: Ivercy visualizes these changes other team members did to you. See the red exclamation point next to some files SCC-Status-Icons? These indicate that there is a newer version of that object in the repository than you have got on your local computer. – So no more flying blind. You see what really goes on with file and Access-Object modifications.

And as an explicit side note to the Subversion users and all others who favor Edit-Merge-Commit: This is extremely valuable help in your style of working. You are not so dependent on the Check-Out/Check-In-Stuff any more if you want to be supported visually by your SCC-Solution.

This also proves some of the points I made recently in defense of the MSSCCI-API for the use with Edit-Merge-Commit.

This blog post describes only the most obvious benefits of Ivercy LCT, there is even more to it. Stay tuned for further updates.

Why don’t you sign up for the Ivercy newsletter, to be among the first to know? Or join our beta program to test Ivercy right now!