Retrospective of our SCC talk at the AEK 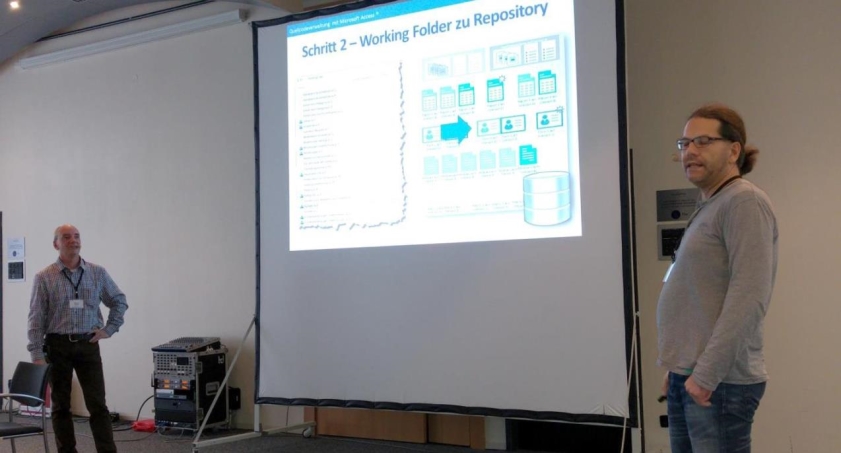 This is a really good day today. I am writing this on my way back from my source code control talk at the final AEK date in Hannover. I’m on the train to Frankfurt which I just caught it in Fulda last minute, after the usual messing up of plans with cancelled trains and delays by Deutsche Bahn.

While our first talk in Nuremberg, almost a month ago from now, was OK in my impression. The ratings from the audience came in not to good. So we (mostly Bernd) edited our slides quite a bit for the next date in Cologne on Oct. 3rd. While the audience’s ratings were slightly better, I have to admit this was only due to Bernd’s improved performance. I myself am not content with my performance there. I wasn’t prepared very well and not focused enough during our talk to make up for the lack of preparation with spontaneity and wits.

The conference venue in Hannover was the Novotel Hotel in the borough List. While the hotel was clean and modern I found it not particularly appealing. The staff was friendly but poorly informed and slow to respond to requests. 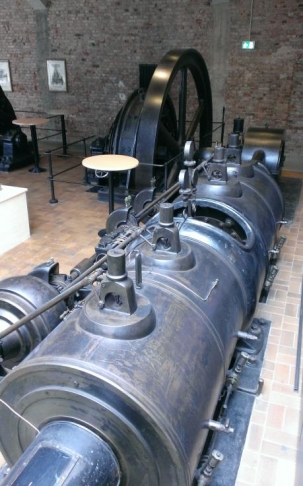 On the other hand, the foyer of the conference rooms was actually quite extraordinary. Some of the old production machinery of the Bahlsen cookies factory, which was on the premises of the hotel many years ago, had been incorporated into the room. This made a quite unusual setting for the conference’s foyer.

Well, preconditions for this talk were worse than ever before. My preparation was not much better than for the last talk in Cologne, I was feeling pretty rotten the days before the conference due to a bad cold and finally, against better judgement, I had a couple of drinks the night before with my good friend Jonas, who was so kind to accommodate me in his guest room in Hannover.

In the conference hall, there were bad news right as we arranged our computers at the speaker’s desk. The cable based internet connection just had broken down. As I had planned an online demo of Ivercy with a remote Subversion repository, I had to resort to the hotel’s WiFi for internet connectivity. Usually not the best option in a geek filled conference room…

But still this talk was going well. We both managed to be short, clear, structured and concise presenting the theory slides. Then Bernd showed his demo of OASIS-SVN, which was, in my perception, the best demo he did so far. Following was my demo of Ivercy. Despite the projector showing his signal-lost-screen every couple of minutes and me messing up the merge-changes part of it, I managed to deliver a well-structured demo. Everything was working pretty smooth, despite the potentially unstable WiFi connection. We finished (almost) on time and I had the impression most of the audience was really paying attention ‘till the very last minute.

The audience‘s verdict is still out, but in my personal opinion this was our best talk by far. A worthy finale to this series of talks. 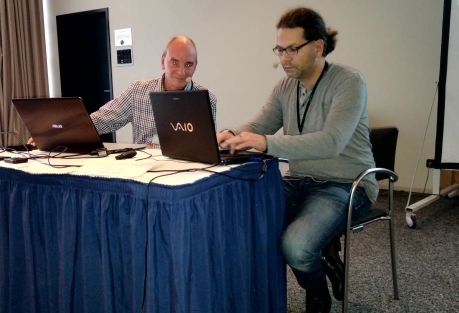 I haven’t spoken to such a large audience for quite a while before this series of talks. So, while I am not scared to speak in front of an audience, I was definitely out of practice for a talk of that scale.

If Bernd and I would have had more speaking experience and practice, I think we could have made this an exceptional talk instead of just a good one. But considering the circumstances we did pretty well.

The concept of doing a joined talk with your main (and only) competitor in the market of your product might have seemed weird at first, but in the end it worked out very well. I found the overall experience very enjoyable and had a really good time speaking to all the guys, who asked questions and shared their source code control experiences with me before, during and after our talks.

Thanks a lot to Karl for organizing the AEK conference and inviting us. And many thanks to Bernd for all the work he put into this.

Update 2015-10-24: Chris Jüngling provided not only the photos of Bernd and me during our talk, but has also written a blog post about our scc-talk as well as several other posts about this year's AEK in Hannover.